In the past few weeks there has been a lot of discussion about the coronavirus which has focused on its exponential growth. Accompanying these discussions, there are always graphs illustrating why exponential growth of infectious diseases is bad. However, these graphs can be misleading if you don’t really grasp one important aspect of exponential growth: the exponential behavior exists from day 1.

Note: This is a hypothetical model and is not intended to represent the coronavirus which seems to double every $3$-$5$ days instead of every day.

If we graph exponential growth, we always end up with graphs looking more or less like this: 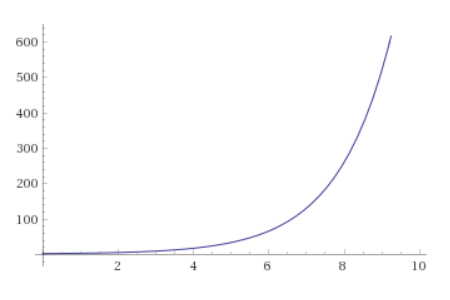 People will sometimes refer to such graphs as “hockey stick” graphs, since they often have a long, seemingly non-increasing, flat portion, followed by a drastic increase which curves up like a hockey stick.

This apparent “hockey stick” behavior is precisely why exponential growth of an infectious disease is alarming: it clearly illustrates the way in which the disease can seemingly become completely out of control overnight!

However, this is also very misleading in both positive and negative ways.

Hockey Sticks All The Way Down

The reason why such a graph is misleading, is because it hides the fact that the growth does not fundamentally change behavior at any point. The “hockey stick” behavior exists from the very beginning. For instance, look at the graph above, which models the first ten days of a disease which doubles every day. Now, look at the following graph which models the same disease, but from day $100$ to day $110$: 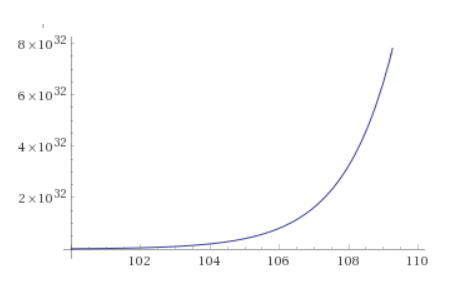 This is why it is difficult for most people to properly understand exponential growth: exponential growth always looks more or less like a hockey stick no matter what time period you are looking at, because it is always getting significantly worse. For any exponential model, every ten day period will have the exact same curve.

In other words, the “out of control” growth by day $10$ seems to disappear when looking at a graph of later days, because the later days are so much worse, that the previous “out of control” values are inconsequential in comparison.

We get a different curve, because we are looking at more than $10$ days, but we see very clearly how the “out of control” $10$ day growth completely disappears.

Going further, if we look at $200$ days, we see that even the above growth is nothing compared to the end of the hockey stick:

More succinctly: exponential growth is bad, because it is always getting significantly worse.

What Does This Mean In Practice

In practice, this means that people are likely to make two possible mistakes.